The 7 Monkeypox Facts to Know

Home » The Blog » The 7 Monkeypox Facts to Know 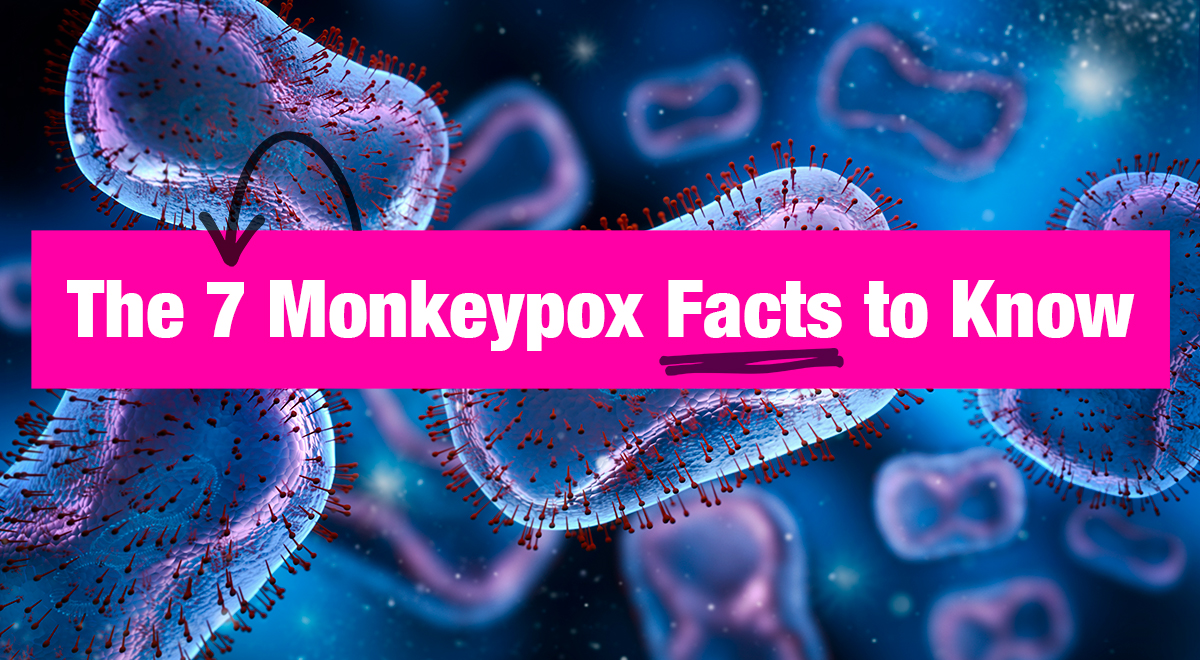 We know the last thing you want to hear about is another "outbreak" of something. Thinking about more germs and viruses might feel annoying, even worrying. We totally get it! We've already talked about COVID-19 a lot. Seriously though, this is different! The monkeypox virus going around is a big deal, and there are some things you should know about it. Below are seven Monkeypox Facts you need to know to help you understand how the disease spreads and how to take care of yourself and your partner/s.

Monkeypox has infected about 5,000 people in the US and over 20,000 people worldwide. That might not sound like many, especially since we've been dealing with COVID-19 for a while. Still, some experts think this is only the beginning of the outbreak, as cases are still spreading.

Monkeypox fact 2: It has some nasty symptoms.

Signs of monkeypox show up about 1-3 weeks after exposure. Flulike symptoms (fever, feeling tired, muscle pain, congestion, cough, sore throat, and headache) can occur, followed by a red rash that initially looks blistery, like chickenpox. The rash bumps fill up with yellow, infectious fluid and can be very painful. Spots can be anywhere on the body but commonly appear on the hands, feet, mouth, eyes, anus, and genitals. Swollen lymph nodes and trouble swallowing are also common. Some people might have all the symptoms, while others might just get a couple-- like only the rash. A case usually lasts 2-4 weeks. If the rash hasn't totally healed, monkeypox can still spread!

Monkeypox fact 3: Right now, monkeypox infections are being diagnosed a lot among men who have sex with other men.

Why? Nobody is totally sure, but there are a lot of things that might contribute to this trend. We know that the LGBTQ+ community is tightly knit, which means a smaller circle of people socialize. A big part of queer culture, especially in urban areas, revolves around big social gatherings. And the pool for sexual partners is smaller. Because of monkeypox's prevalence among the queer community and many peoples' biases, it's clear that...

Monkeypox fact 4: It's being stigmatized.

You guessed it, gay and bisexual men are being picked on by some people for spreading monkeypox. (eye roll) Sounds sort of like the stigma attached to HIV, right? The truth is that monkeypox isn't a "gay disease." Anyone who has close contact with another sick person can get it. And, as you now know, monkeypox doesn't only spread through sex!

Even though monkeypox can be spread through having sex, it's not actually considered a sexually transmitted infection. That's because it's mainly spread through skin contact, especially from areas covered in monkeypox's iconic red, raised rash. It is also possible to transmit via prolonged face-to-face contact, like through kissing.

Monkeypox fact 6: Being HIV-positive doesn't necessarily increase your risk of getting really sick with monkeypox.

Phew. You can relax a little! If you're keeping up with your meds, your symptoms would probably be mild if you got sick—just like anyone who gets monkeypox. It's more dangerous to immunocompromised people, like lots of other infections. If you're undetectable, monkeypox isn't any riskier to you than it is to anyone else. This is another reason to consistently go to your appointments and get your labs updated!

Monkeypox fact 7: There are still ways to prevent it.

Now, just because people with monkeypox don't usually get very sick (like, to the point of needing to be in the hospital), doesn't mean it's something you want to get sick with. It's a good idea to keep the following recommendations in mind. Doing so might prevent you from catching monkeypox and spreading it to others. Who knows-- your coworker or classmate might be immunocompromised, and passing along monkeypox to them could make them sick.

How about the vaccine?

The JYNNEOS vaccine is effective, safe, and FDA-approved to prevent monkeypox infection and symptoms. Check with your local health department or healthcare provider to see if you can get the vaccine. Some sites have enough supplies to allow anyone at higher risk to get vaccinated, but most areas of the country currently have a very limited supply. It is used for post-exposure prophylaxis (PEP) in many areas with fewer doses. So, if you get monkeypox or are a close contact/were exposed, you might be able to get the vaccine. Over time, the monkeypox vaccine will likely become more accessible as the government receives more doses.

Take it seriously, but don't panic.

While cases might be increasing and directly affecting the LGBTQ+ community, the best thing to do right now is to take steps to reduce your risks of getting sick. If you think you have monkeypox, isolate yourself at home and contact your healthcare provider right away. They can determine if you need to be tested. If you have access to the vaccine, try to get it. Make sure you are taking any treatment prescribed for HIV, and be especially careful around immunocompromised people.

We can all get through this together!