Adrenaline: Living on the edge with HIV

Home » The Blog » Adrenaline: Living on the edge with HIV

Jumping out of a plane. Whitewater rafting. Cliff diving.

Let’s face it, some of us get a surge of adrenaline when we read those words, and some of us are totally petrified. We’re all wired differently.

But what is it about those adventure and adrenaline-pumping hobbies that leave some of us craving more? Is there anything wrong with it?

Let’s dive (no pun intended) into learning more about what’s behind the adrenaline of thrill seeking!

Why do some people crave adrenaline rushes?

There’s a small part of the brain called the amygdala that warns us about potential danger. In prehistoric times, danger meant people had to react quickly to things in order to survive, like running from a bear or a lion.

In these life-or-death situations, our amygdala tells our body to release a hormone called adrenaline to help us react quickly. When you hear people talk about an adrenaline rush, they’re talking about a surge of these energy-boosting chemicals.

The thing is, folks today aren’t running from bears and lions in their daily lives. But our brains can still react that way when we’re doing something scary or new.

Have you ever felt that adrenaline rush right before you asked someone out on a date? Even though it’s not quite life-or-death, you still get pretty nervous, and your body reacts to the nerves by causing butterflies in your stomach and sweaty palms.

The same thing can also happen when you’re in a new situation, whether it’s every day or a new adventure. Adrenaline is released under all sorts of circumstances, like sky-diving, starting a new school, your first day at a new job, moving out on your own, starting your own business, or even going out with someone you really like. These are all new experiences that can get your hormones going. Speaking of hormones, did we forget to mention that sex is on that adrenaline-pumping activity list? ☺

Is there anything wrong with wanting an adrenaline rush?

It feels great, so there can’t be anything wrong with thrill-seeking, right?

The thing about those feel-good hormones is that the more we get of them, the more we want, and the more we need to feel the same adrenaline rush. In this way, they can also be addictive. Have you ever heard of the phrase “upping the ante?” That’s when something that used to be new and exciting becomes so routine that it gets boring, and you have to go further and further to feel the same thrill.

This is like those friends you might have who just aren’t excited to go to an amusement park anymore because they’ve gone so many times already. The roller coasters and rides became old and stopped being exciting for them, and now they’re looking for a bigger thrill, like rock climbing or skydiving.

There’s nothing wrong with living on the edge, as long as you know all the risks involved in what you’re doing. Some activities, like drug use or unprotected sex, might be exciting, but can also be risky. While thrill-seeking can give you an adrenaline rush at first, once those feel-good chemicals wear off, you might be dealing with some unintended consequences.

The thing is, you can still do something exciting while also staying safe. In fact, this is sometimes even more fun, because you don’t have any worries in the back of your mind distracting you from the excitement.

Why not try something new and exciting?

Remember, life is all about trying new things! It’s normal to want to live life to the fullest and make each day count. There isn’t anything wrong with trying out different high-adrenaline activities, as long as you’re safe and understand any risks that could be involved.

Some of us crave adventure more than others. So, go ahead, think of a couple new things that you’d be excited to try and find a friend who is gutsy enough to tackle some of them with you. After all, living with HIV doesn’t mean you have to watch from the sidelines. You can jump in, too — just remember to have fun and stay safe!

Free ways to get active that don’t require a gym 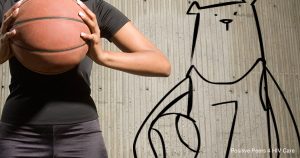 The importance of exercise when you're living with HIV